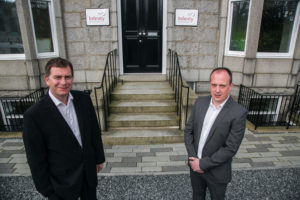 Infinity Partnership is hoping to win at the British Accountancy Awards for the fifth year in a row at a ceremony in London later this year.

The Aberdeen-based accountancy and business advisory firm has been nominated in three categories at the 2019 British awards.

Simon Cowie, managing partner at Infinity, has been a named a Partner of the Year finalist, while Infinity is shortlisted in the Scotland, Northern Ireland and North England category. Simon won Partner of the Year in 2016, while the business has won the regional award in 2015, 2017 and 2018.

In addition, Infinity has been nominated in the Outstanding Advisory or Client Project of the Year category for its work with an oil and gas client based in the North England.

It now means Infinity has been shortlisted for five national awards in the past three weeks after being named a finalist in two categories at the 2019 Accounting Excellence Awards. The British event, hosted by comedian Sean Lock, takes place on Wednesday, September 25, while the Accounting Excellence Awards, also in London, are on Thursday, September 12.

Greg Houston, who was recently promoted from client relations manager to associate director at Infinity Partnership, said: “The award nominations reflect the growth of the business in the past year as we continue to provide the modern-day accountancy services required by today’s business leaders. We are absolutely thrilled to be shortlisted for five national awards and it’s a credit the team we have at Infinity.”

Infinity has increased client numbers by more than 40% to 2,500 and number of staff by 50% to 24 in the past 18 months. In May 2018, the business moved to new offices twice the size of its previous premises.